When someone posts on Facebook that they’re throwing out a 3D printer, you convince them to give it to you, period. You don’t ask silly questions like why they’re throwing out the printer, or what model it is, or whether or not it even turns on. After all, even in the worst case scenario, there are going to at least be parts to scavenge!

This was how I ended up with a Tiko as my first (and currently only) 3D printer.

If you’ve never heard of the Tiko, it was a Kickstarter project that failed. Miserably. So miserably that it’s exceptionally difficult to get useful advice on the printer; people just want to talk about how awful the Tiko is.

The printer does, in fact, work. It turns on. It broadcasts a wifi network. Its web interface “works,” though just opening the page turns the console very red. At some point I had to manually set a variable in the console in order to get it to connect to my wireless network, and there were further problems that cropped up when it tried to update the firmware.

It prints things. My first print was, in fact, better than many other first prints people got on the Tiko, it seems. It at least stuck to the bed all on its own. 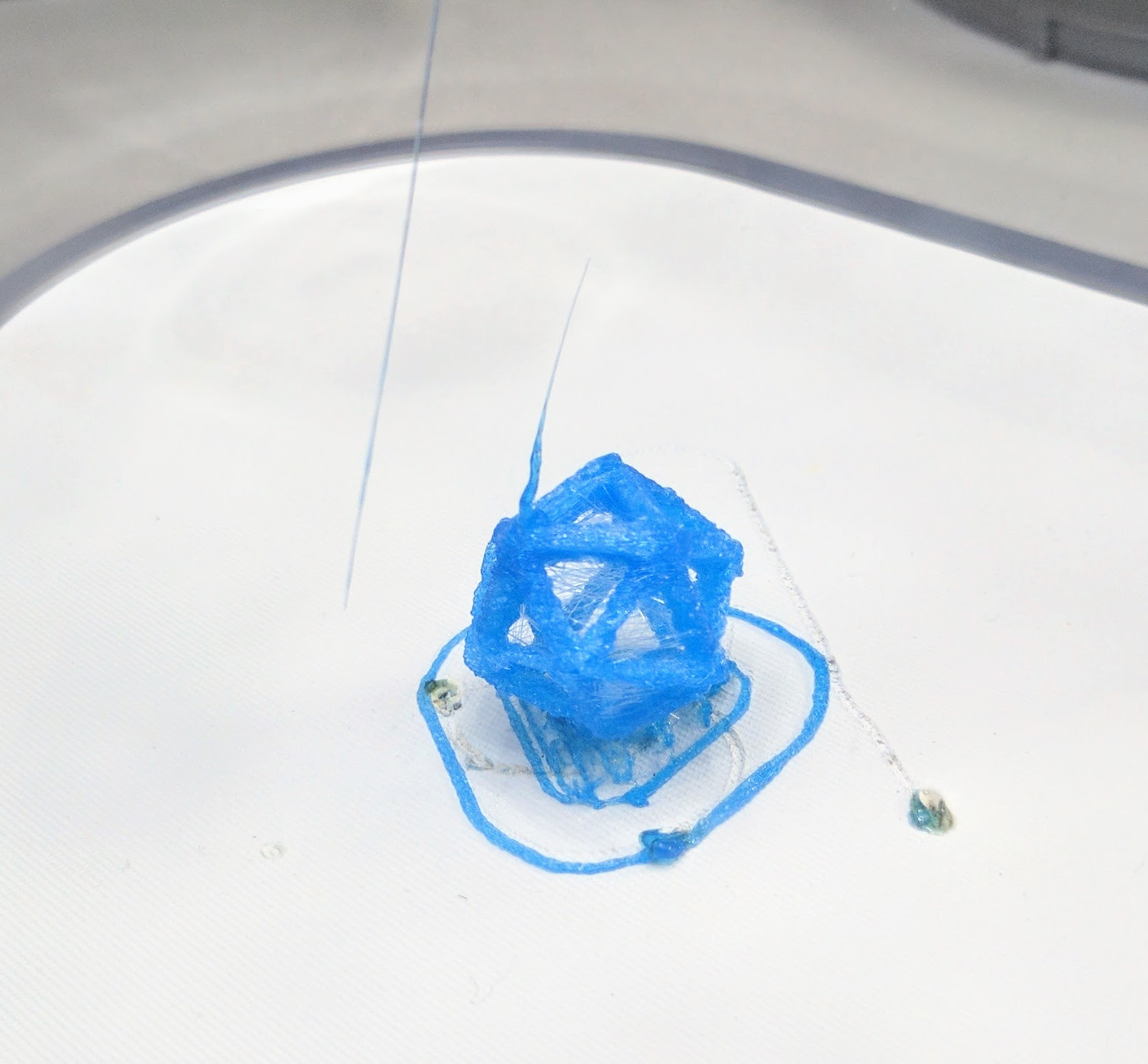 See all that damage to the print bed? I received the printer that way, but as I understand it, that’s a common problem people have been having using the “auto-calibration” option with the Tiko.

The thing is, auto-calibration is more important for this printer than others. Tiko took being “The Unibody 3D Printer” too far. Sure, it’s cute (though I think the most aesthetically pleasing features have nothing to do with it being unibody). But it’s pretty standard to manually calibrate a 3D printer using a piece of paper between the nozzle and the bed… which you can’t really do with this printer. When assembled, you have no access to the print bed. 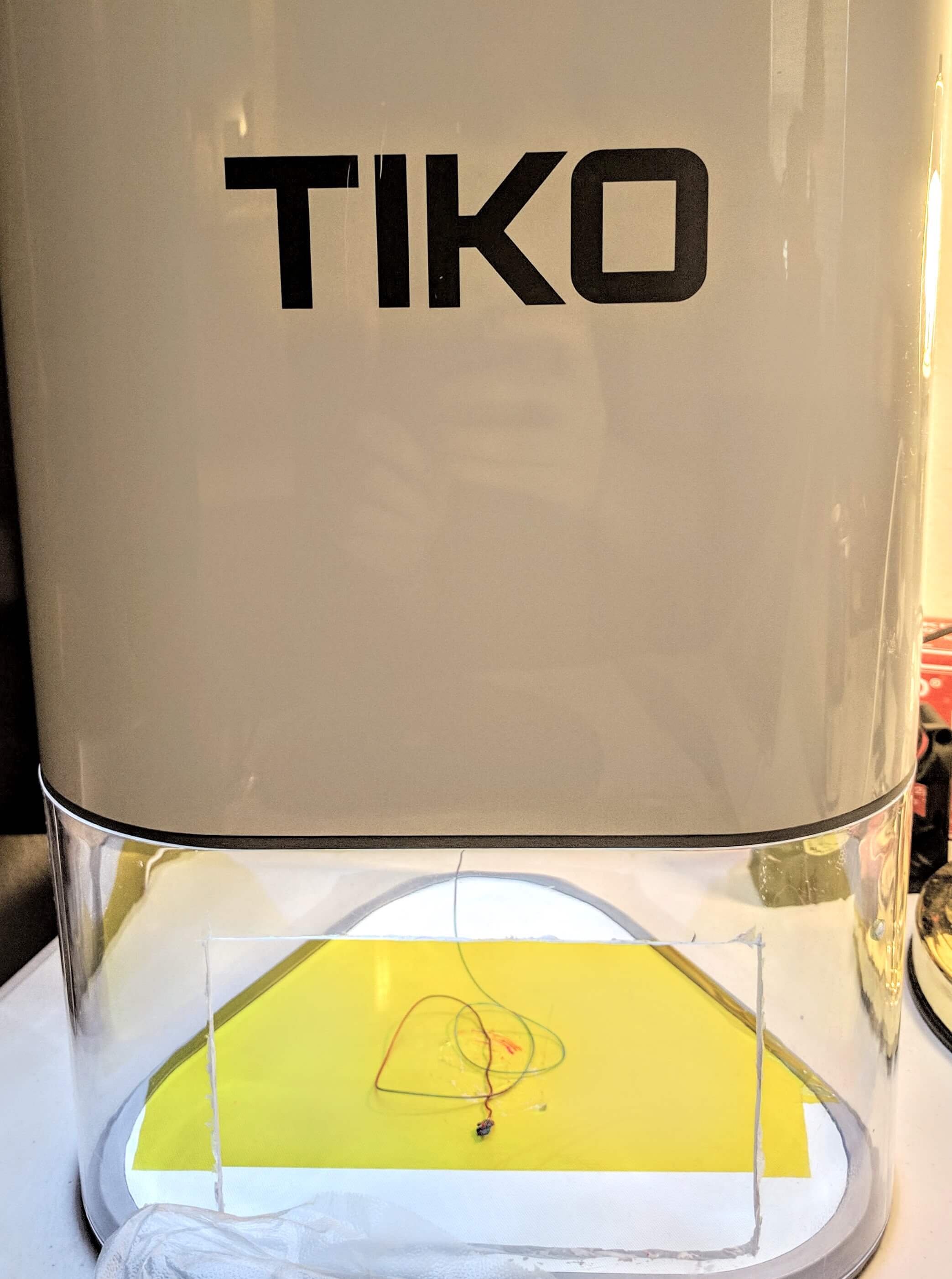 I also heard (and saw gorgeous photos of!) great reports coming from some people who had started using the Cura slicer instead of Tiko’s built-in nonsense. I wish I could say that fixing the calibration issue and giving it better GCode allowed me to suddenly be able to make great prints. But this has not been the case.

The Tiko seems to occasionally throw fits half-way up the Benchy model I’ve been using. I know other Tiko users have had similar problems as my blue half-benchy below. 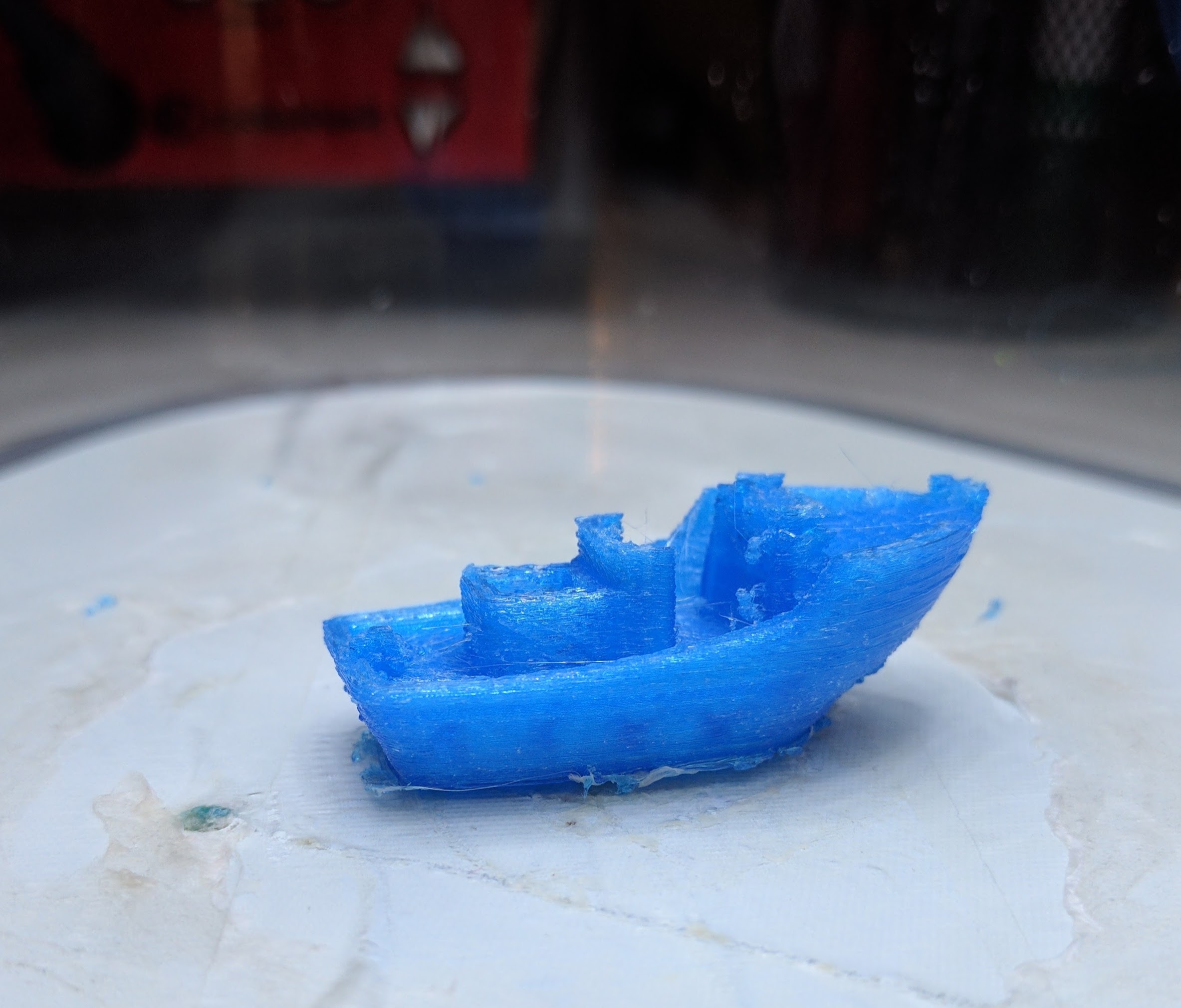 Frustratingly, this has never happened while I was watching it. The conclusion I’ve reached is that clearly my Tiko just doesn’t like it when I’m gone for too long. It did the below with some ABS when I stepped away for a quick shower. 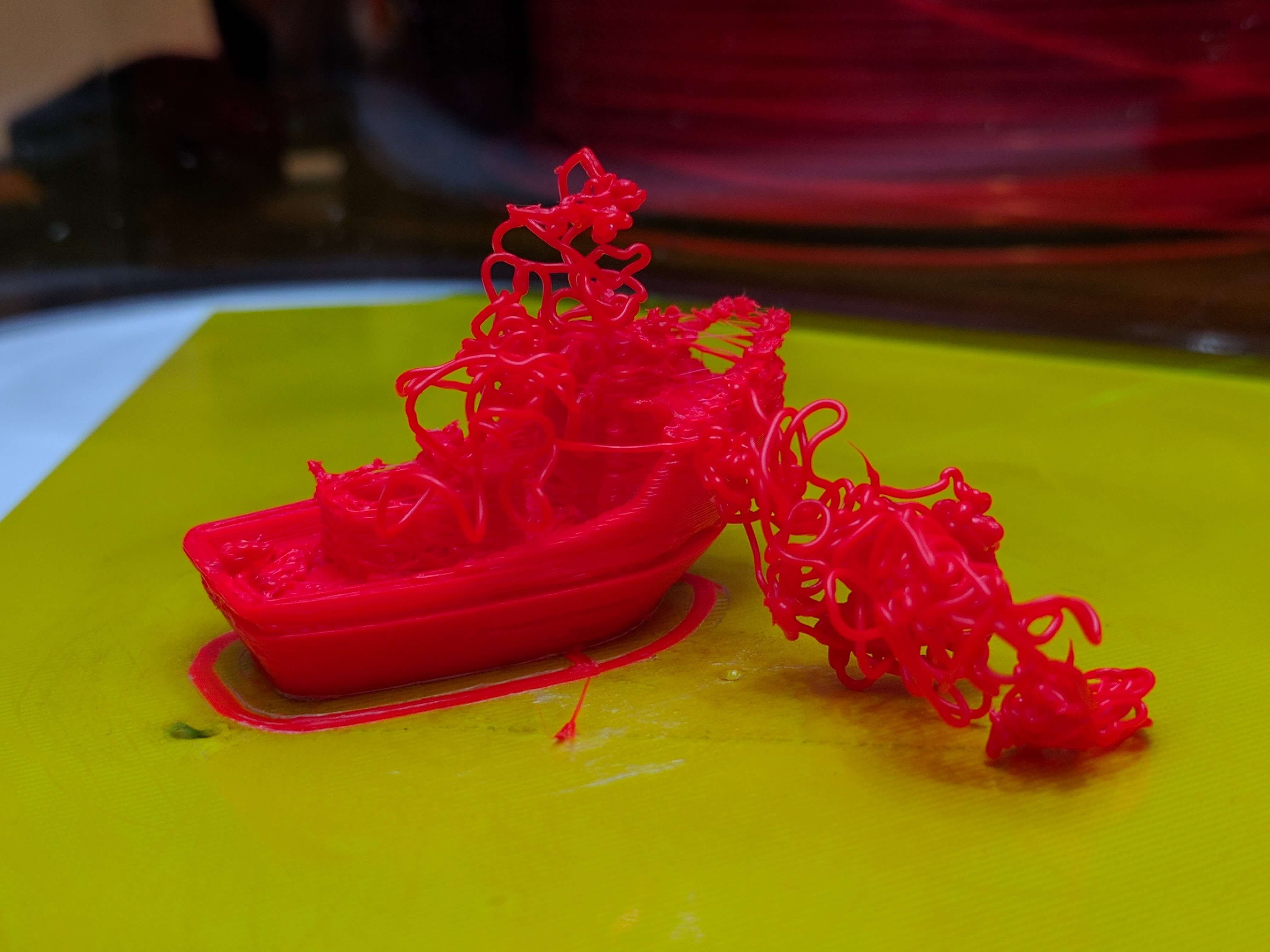 Yes, I did just say ABS. I know the Tiko generally isn’t considered ABS-friendly; after all, the print bed isn’t heated, something often considered required for printing with ABS. Hower, the best print I got pre-Cura was with ABS. Below is the third thing I tried to print on my Tiko, before the modification to its body and before switching to using Cura. 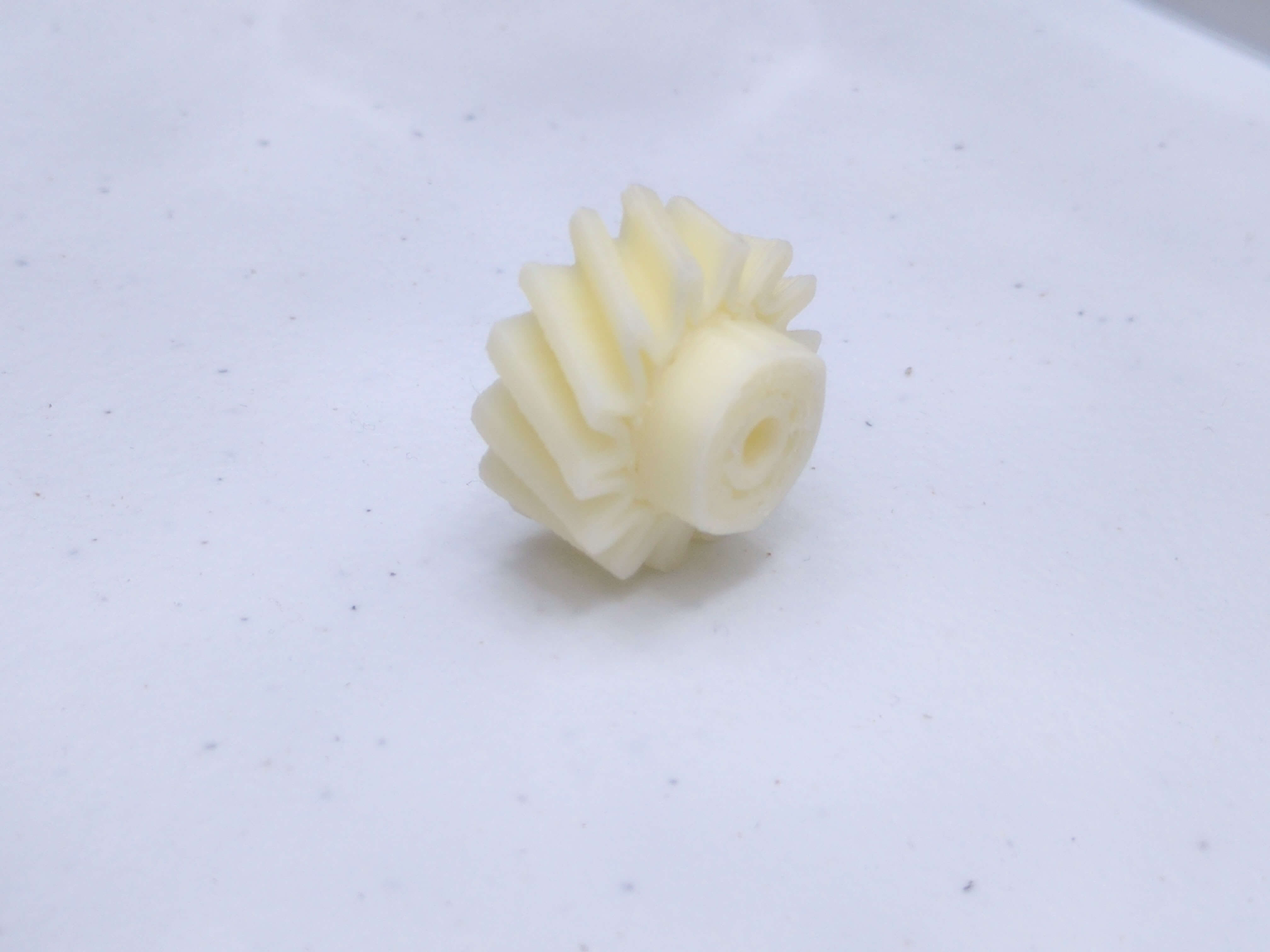 That may or may not have been my best print, period. I then tried to do the same thing with the Tiko’s Gem PLA, with a slight temperature decrease, and got this nonsense. 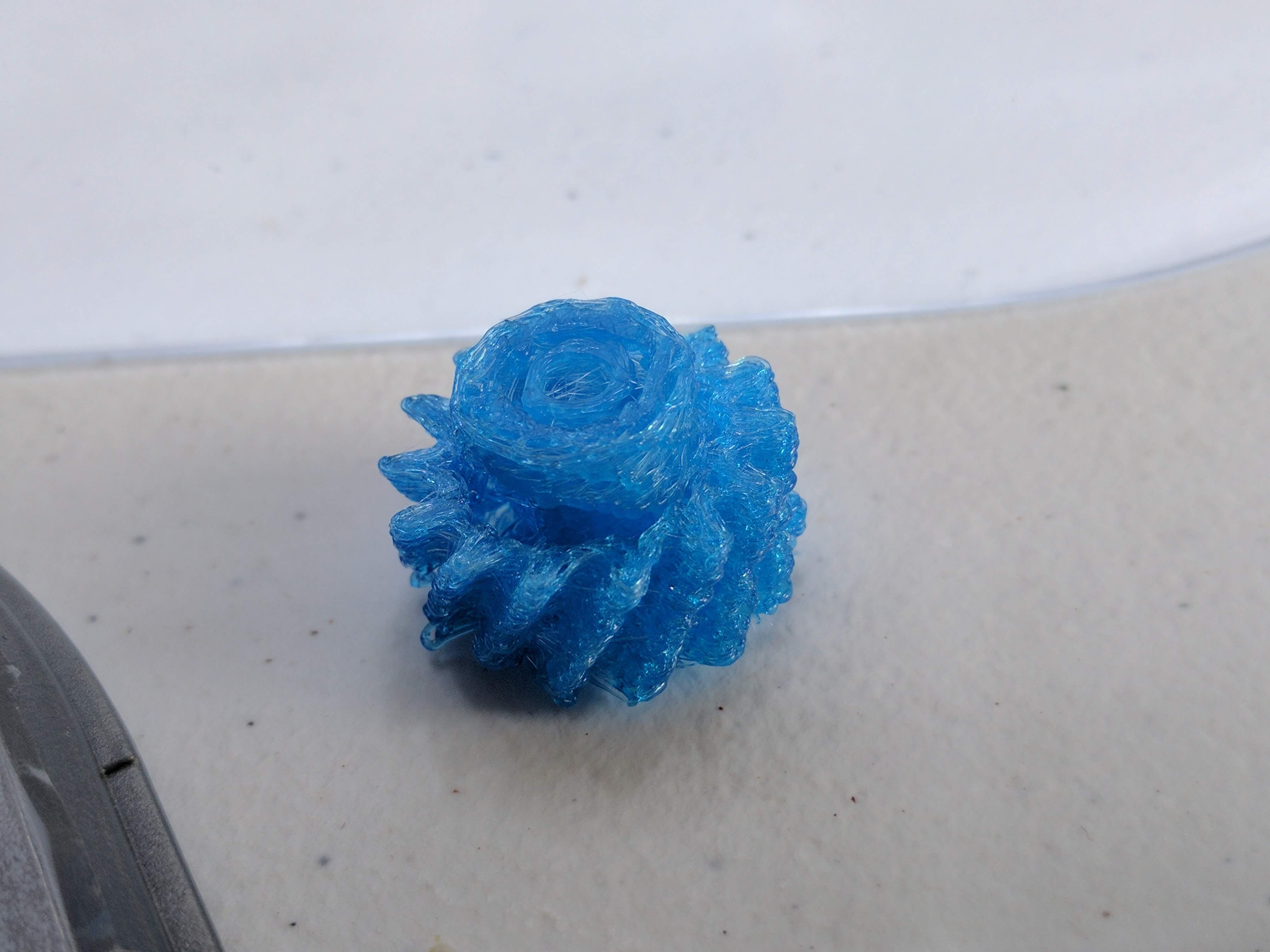 I eventually managed to get this guy with the Cura slicer and some ABS on a very stickified bed (absolutely necessary with this bed). 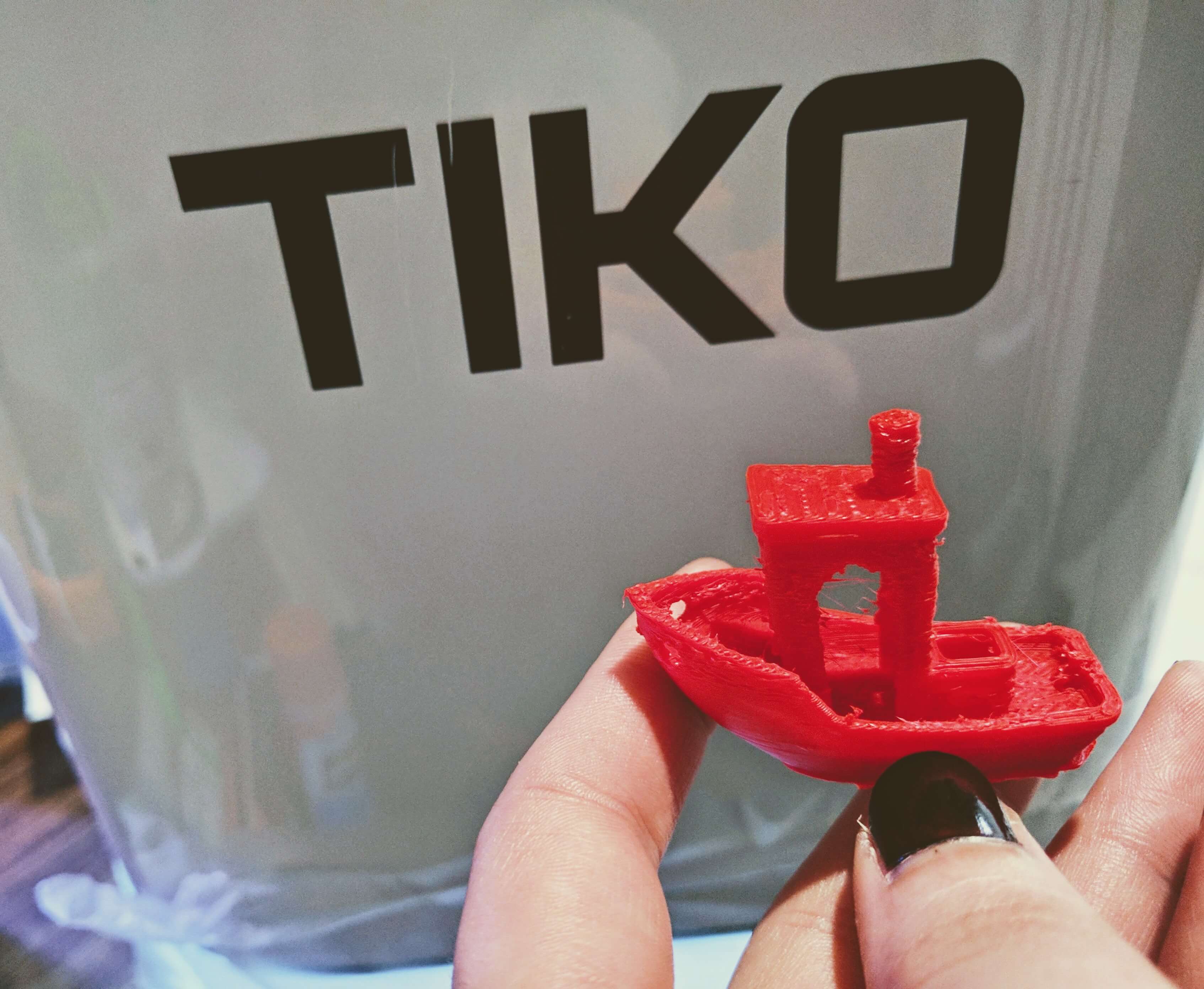 Really, if it wasn’t for the results with ABS, I probably would have given up on the Tiko all together. Which would have been quite sad, considering how much fun I’ve had learning slicer settings! After trying some ABS out in the Tiko, I was quite convinced that the PLA was simply bad (which I’m still not certain it isn’t, to some extent)… but then my friend used it in a MakerBot to create the handsome print below. 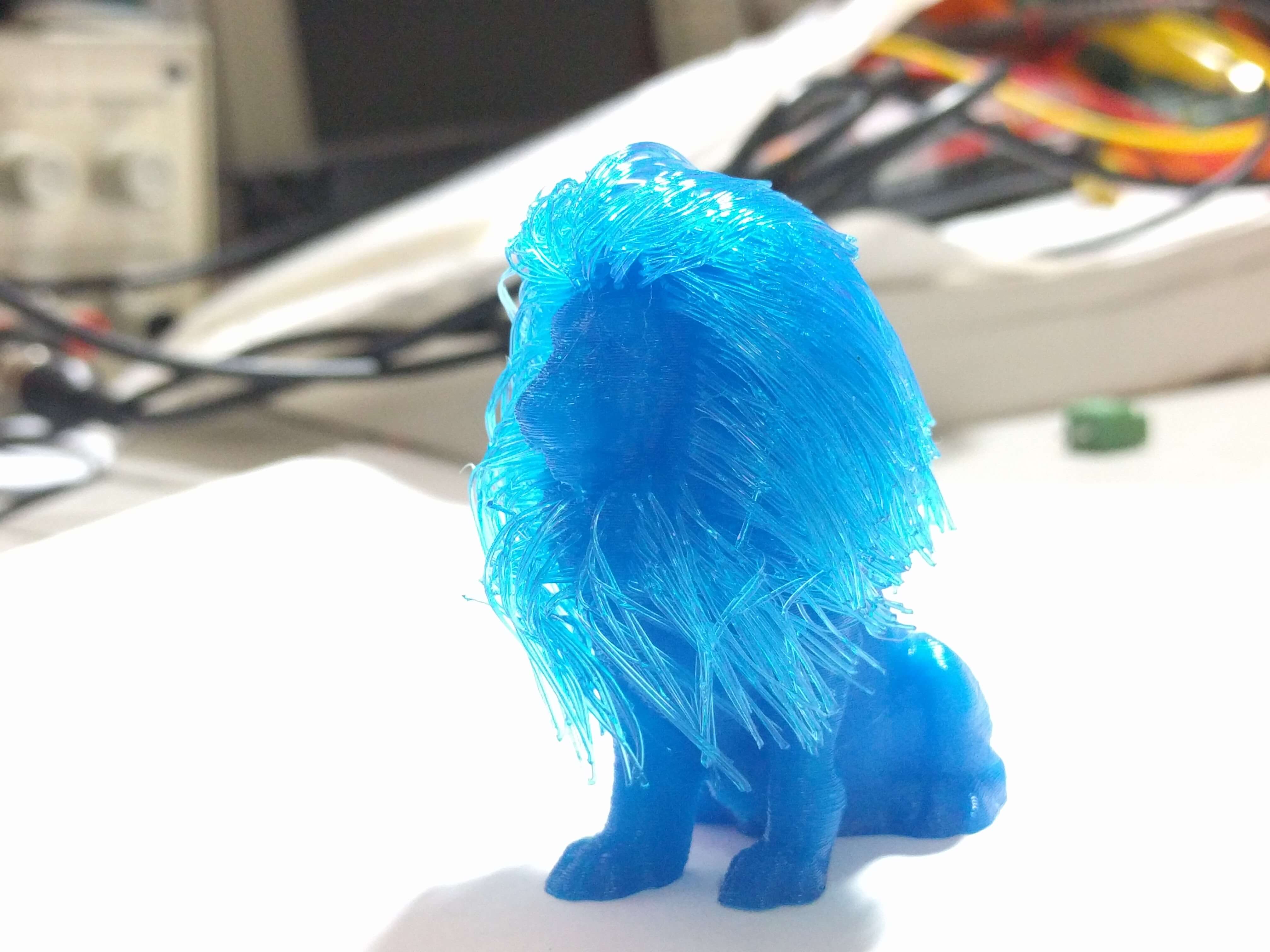 My suspicion, especially after more prints and having opened up the extruder on this thing, is that the extruder can’t really handle the thinner Gem PLA. The teeth slipping on the filament could easily explain what seems like unevenness in the PLA extrusion — something my extensive playing around with temperature settings has not yet fixed. Sadly, there does not seem to be an “easy” way to get the single bearing to push the filament any closer to the only gear’s teeth, to compensate for deviation in filament diameter. I did recently widen the last segment of the filament path in the extruder, as I noticed the tight-looping Gem PLA would occasionally get caught on an edge and it made feeding in filament occasionally very annoying.

Thankfully, not all of my Tiko problems seem to emanate from the extruder! I’ve realized that the print bed for the Tiko is awful. I can excuse it not being heated, and I know having to use tapes and glues and the like is perfectly normal with 3D printing. But all of that aside, the bed is quite simply uneven. So post #2 on my Tiko experience will hopefully include updates on attempts with a custom glass print bed! Worst case scenario, I should at least be able to print some useable gears with the Tiko, some ABS, and a heated glass print bed — more than I could really have hoped for from a free, second-hand, bankrupt 3D printer!